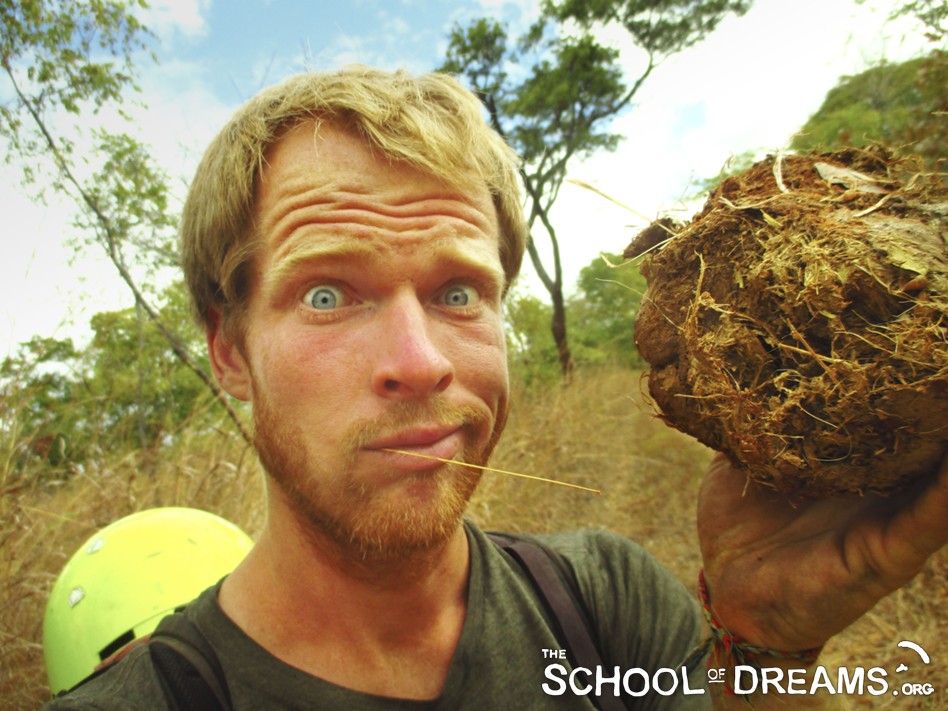 After "cheese" the first word I learn in any new country is "yes." It's a survival thing.

You see, despite my red hair and funny looking face, it is not uncommon for someone to begin speaking to me, in their native tounge, as if I were their neighbour. And though I could find polite ways to stop them, I have found that it requires less effort if I just say "yes" after each statement, occasionally throwing in a "No!" for texture.

In the Salima area of central Malawi, a group of eager children followed me up a ridge. The scorching heat turning their excited screams into an inaudible haze, I can vaguely recall a young boy staring at me, exclaiming "Elephant!" Feeling mildly insulted, but too tired to care, I gave him the thumbs up with my usual "yes." This continued until I launched 30 minutes later; "Elephant!" "Yes." "Elephant!" "Yes." 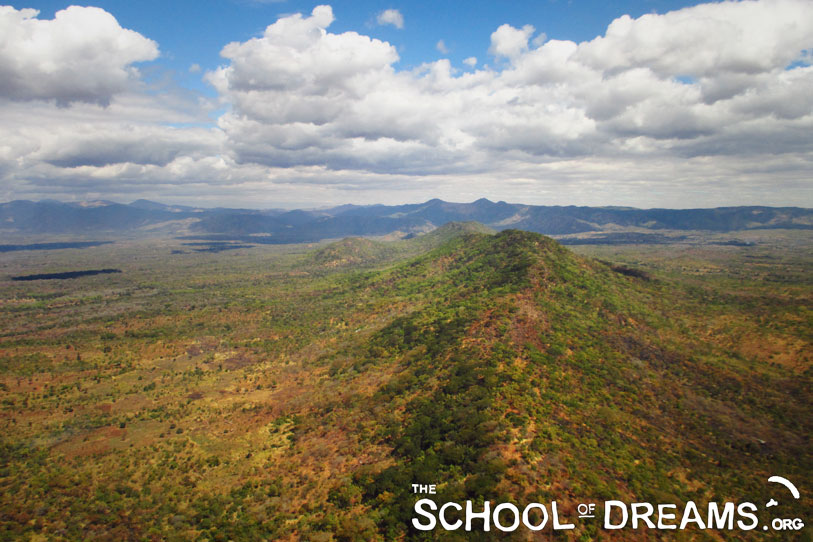 The flying was intense, soaring low over the 100 metre high ridge with a personal goal of making to the other end and back; a daring out and return along this interesting geographical feature. Over tall trees and no landing opportunities I flew cautiously, until a feeling in my stomach told me to turn back. I tried, but the lift had gone and now my feet were dangling but 20 metres over the tall trees below. Pointing down-wind to make distance, but without a clearing in sight, I was mentally preparing for a tree landing. Then, by some great fortune, I spotted three mud huts and a small garden close by. I had just enough height to make it! 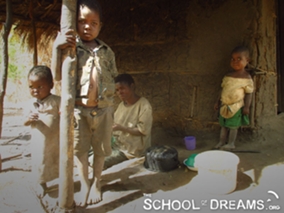 Children of a three-house settlement observe a paraglider landing in their garden.

Upon landing the small remote community, the 15 villagers and children kept back and went about their business. It was as if I didn't exist. Strange. I waved and said hi, but to no response whatsoever. While packing up a young boy found reason to approach me. "Elephant," he said.

As interesting as this was, I had 8 km of bush to whack by GPS before dark and chose not to care; not until after covering my first few hundred metres. There before me stood a pile of poo that could have filled a Mini. 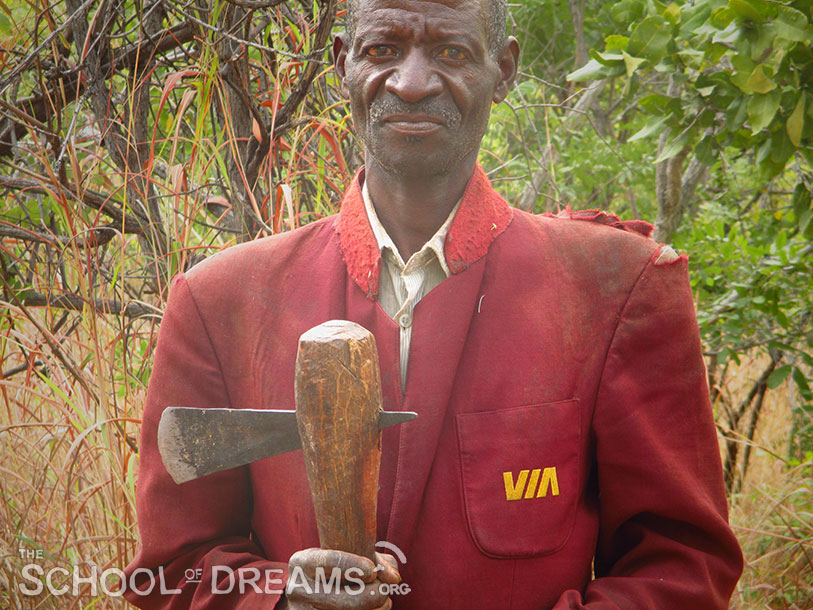 A lumberjack of Canadian Railroad attire warns of twelve hungry elephants roaming nearby.

Then, a tree fell "Krrrrrr-pommmbb" right next to me. I froze and looked around. Another rustling came from behind. I turned slowly as not to startle what turned out to be a handsome old lumberjack wearing an antique "Via Rail" conductor's coat. In perfect English he said "What are you doing here? The elephants can kill you!"

A tsunami of emotion overtook me. So sure of myself, missing all the warning signs, I had ultimately been chewed up by my own reality and crapped out into the obtuse ball of humiliation that I was. "Yes" was no longer the answer.

The hours which followed offered much time for self-examination. How could I have been so arrogant? Who am I serving in behaving this way?

Having reached camp just before dark, I had escaped the hoofs of the hungry mammoths behind me. But that night, nothing could have felt more crushing than the realization that, having become so absorbed in what I had to offer these communities, I had ripened into a self-important cow pie, neglectful of the gifts they offered me in return.

Searching for the Witch Doctor

With our laminated map and Canadian accents, we've been running around looking for mountains none has ever heard of, winding up on roads which haven't been used since the British occupation. We got lost in the Rhumpi district of Northern Malawi. Though people were kind, they were still speaking a dialect different than the one we'd learnt in the south.  [show:image:19902]  As we drove towards an exciting ridge on our map, the rough road became turned into a corn field so we grabbed our packs and trekked onward by foot. Nearing the base of the ridge, the villagers became sparse to the point where not even the cries of an overly excited child could be heard.  [show:image:19905]  It was there that we found him. 20 dreadlocks, 15 children, 5 teeth and 2 wives. This man was the Witch Doctor and that prominent ridge was his mountain. Godfrey had often warned us that while paragliding in Malawi, one could often be accused of Witchcraft. With this in mind, we were concerned with how the wise man would feel with our taking to his sky.   [show:image:19910] [show:image:19909]  The path was straight, steep and merciless. As we panted like dogs, the old man skipped ahead, taking time to collect roots and twigs along the way. Atop his mountain, we found tall grass laying on its side, a sign of strong winds in the area. Unaware of why we had hiked up the hill with so much cloth and twine, he stood silently as we fastened ourselves to them and floated upward into the sky.  [show:image:19911] [show:image:19913]  And, while the valley seemed full of potential for incredible cross country flying, it was windy like there were no tomorrow. We flew in the dynamic ridge lift every day that week, always landing near the wise man's hut, spending most of our time learning about root medicine, calling on spirits through dance and the infinite possibilities of cooking with peanuts. 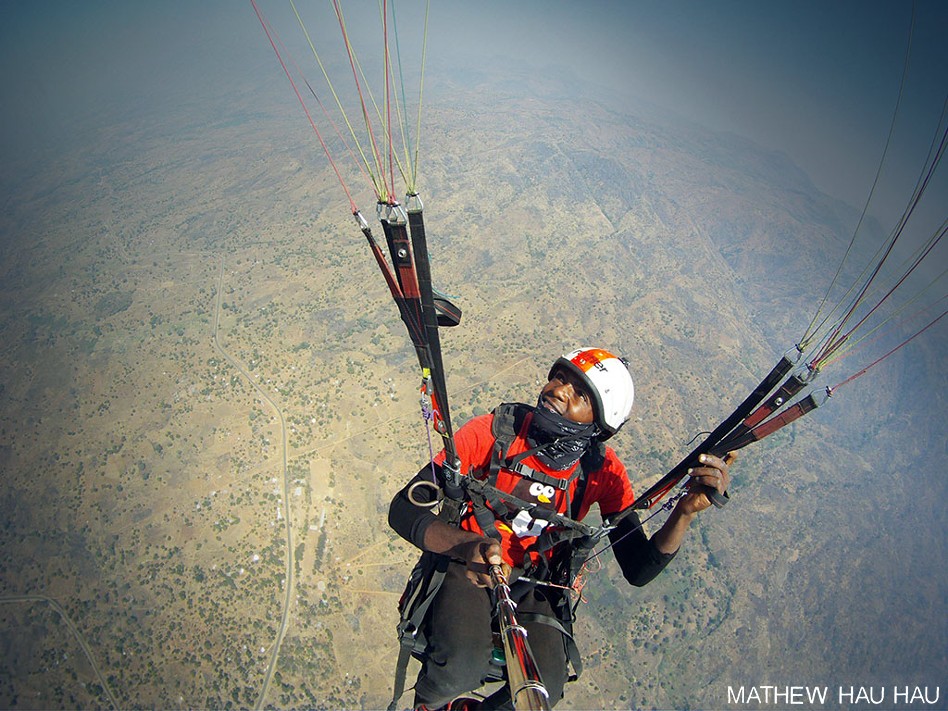 Who Is Mathew Hau Hau?

Mathew is the School of Dreams Operations Manager, Malawi's only active Paraglider Pilot and your new best friend!  [right:image:22617]He first met with Benjamin shortly after the discovery of the Mganja flying site during the 2014 Expedition. Of the eight people interviewed for future pilot training, Mathew was the only one who found ways to keep in touch on a regular basis until Benjamin's return, two years later.  It is worth noting that, after the many challenges which arose in 2014, Benjamin was on the fence about continuing the project. It was, in fact, Mathew's keenness to learn and desire to fly which motivated the Canadian to return.  Thanks to his fantastic English and hard work ethic, he and Benjamin were able to exceed the three main goals they had set out to complete during their time together in May and June of 2016.  [show:image:22465] [b]Goals Completed:[/b][ol] [li]Make Mathew into a competent novice pilot (27 flights and 5 hrs logged)[/li] [li]Set up a Solar Powered Internet Cafe for local youth.[/li] [li]Create local jobs by purchasing sewing machines and teaching local moms to sew.[/li] [/ol]Since Jordan left at the end of June, Mathew has flown several dozen more times and has taught himself to fly cross-country. He has also taken on teaching the youth how to use the new Internet resources and works with the women on various community sewing projects.  [show:image:22633]  [right:image:22595]Mathew is one of the sweetest guys you'll ever meet and is overjoyed at the thought of international pilots coming to fly with him next year!  When you visit the School of Dreams, Mathew will be happy to meet you at the airport in Lilongwe (LLW) and help you immerse yourself in the community and culture, at your own pace. 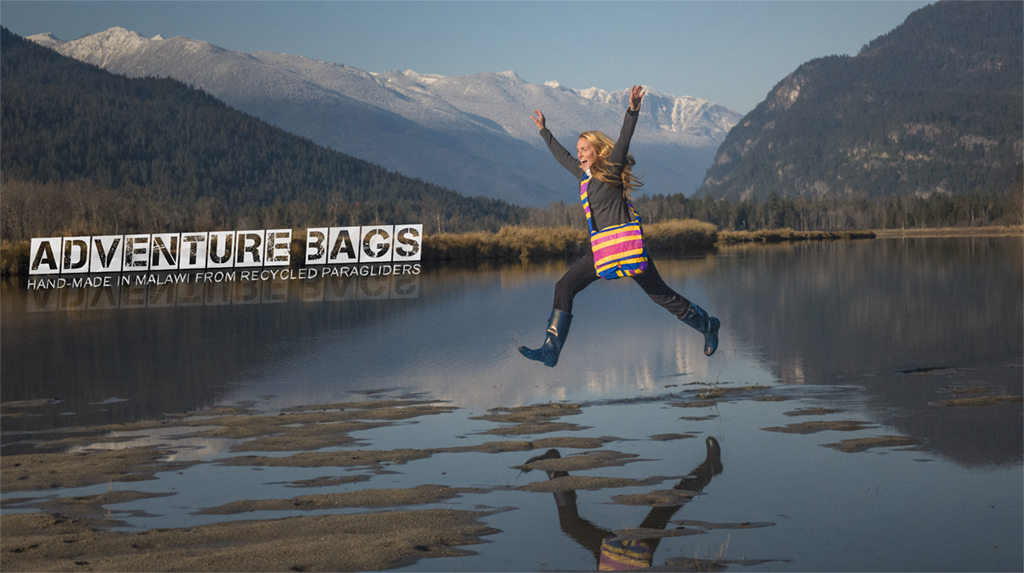